Memories of the Belsnickel 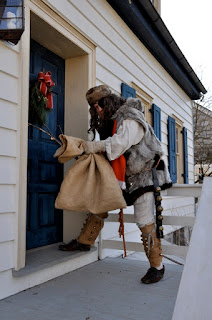 Of all of the merry Pennsylvania Christmas traditions, the Belsnickel is an oddity.  Literally “Nicholas in furs,” the character was an ill-tempered man who roamed the countryside, dressed in old clothes and furs, and terrorized the children in all houses he came across.  His personality and habits varied from region to region and, in some parts of Pennsylvania, he was many people at once as groups of Belsnickels would “trick or treat” amongst their neighbors, begging for some of the Christmas cookies baked in massive batches and playing tricks if not satisfied.


A few first-person accounts of Belsnickeling survive, mostly published as nostalgia pieces in newspapers or other publications in the early 20th century.  One, in particular, is by Matthias Mengel, age 65 in 1895, and was first published on December 15, 1951, in “The Pennsylvania Dutchman,” Lancaster, PA.

“Particularly vivid in my memory is a Christmas eve when I was one of three or four lads who started out to act the “Belsnickel.”  Well, each of us boys carried a switch in his hand.  We dressed in the clothing we could find at home, tied handkerchiefs over our faces and filled our pockets with chestnuts and hickorynuts.  We went to the house of a neighbor where there were children, and expected to have some fun by frightening the children by our singular appearance, throwing the nuts on the floor, and belsing the children if they should pick up any of the nuts.  We tinkled our bells, entered the house and began jumping about and throwing nuts, when the head of the family, who was an old Amish, said very sternly, ‘I don’t believe in such foolishness, clear out!’ and we cleared.  You see that was an English and Amish neighborhood.  The English did not observe the German customs of Christmas and the Amish were a very plain people like the Quakers and had not festive occasions as had the Germans or other denominations in other sections of Berks, where Christmas especially was a season of feasting, merriment and general rejoicing.  We knew nothing of Santa Claus, rosy and plump, with twinkling eyes and furry dress making his aerial visitations in a sleigh drawn by reindeers at dead of night and silently, excepting the tinkling of his bells, which children are never awake at that time, for he comes only when they are asleep.” 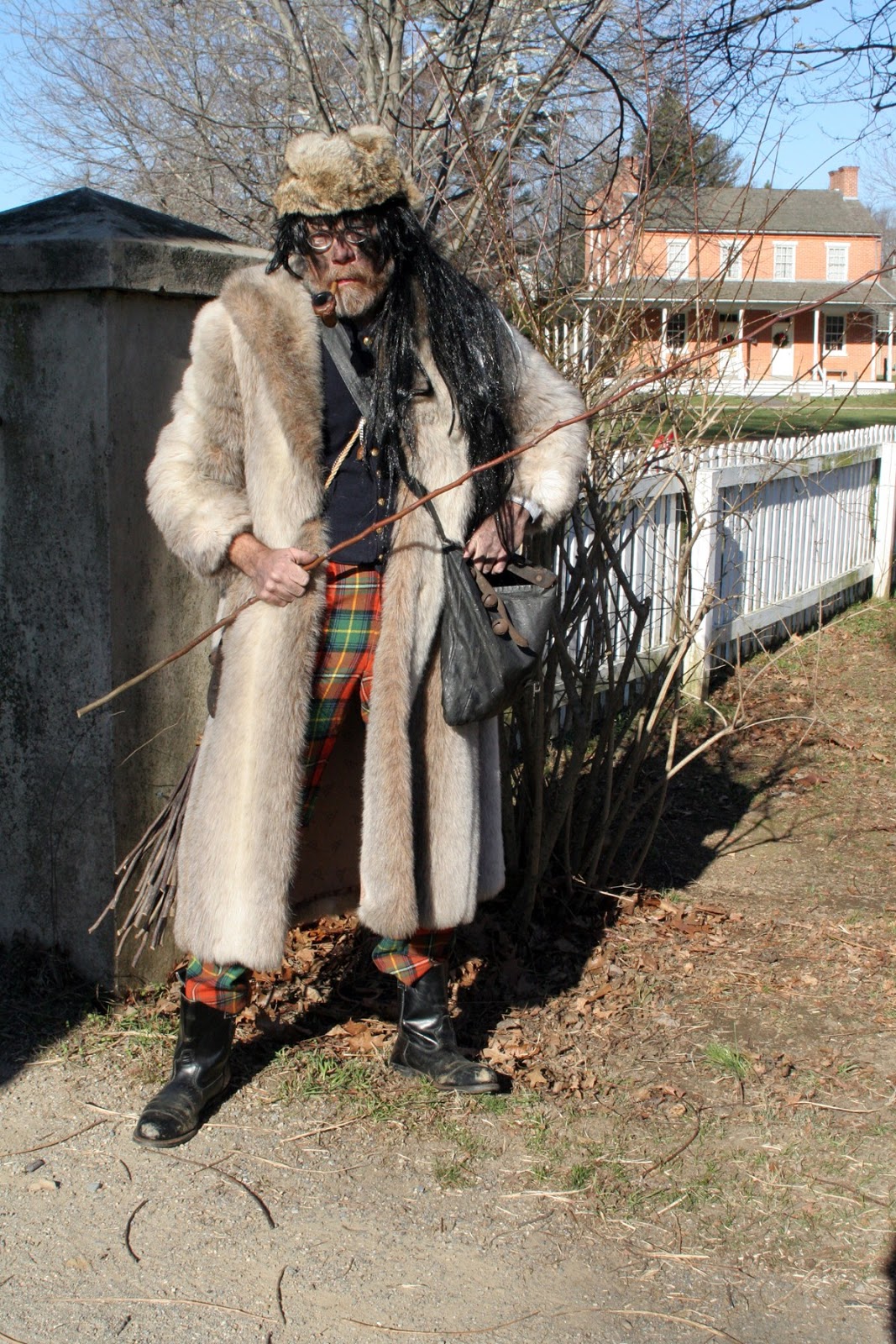 Another account comes from pages 126-7 of volume one of The Passing Scene, a collection of books first published in 1982 that chronicle the history of Berks County.  “The Rev. Jacob Fry, D.D., a former pastor of Reading’s Trinity Lutheran Church, observed in an interview conducted some 70 years ago that when he was a boy living in the village of Trappe (Montgomery County) a Belsnickel, outfitted in ragamuffin clothes and an unpleasant mask, made his rounds on Christmas, tossing nuts and sweets within the reach of assembled youngsters.


“When the children attempted to gather them up, he’d rap their knuckles and “other parts” with a switch.  This character, common to many sections of Berks prior to 1900, was regarded with mixed emotions by the young folk—for obvious reasons.  Older kids, wise to the situation, took the whole routine good-naturedly,” the pastor continued.


Belsnickeling traveled around the mid-atlantic region of the United States, with versions of the Belsnickel turning up in Baltimore, MD, and as far away as Indiana, where it seemed to morph into trick or treating in reverse.  According to the December 11, 1909 edition of the Jasper Weekly Courier, as quoted by Ruth Reichman in the Indiana German Heritage Society Newsletter, “Saturday night was ‘Belschnickle’ night and was observed by a large number of Jasper youngsters, who with their masks and odd makeups furnished amusement for those at home who did not venture out.  This is an ancient custom of the ‘old country’ but is still observed annually by the little folks in Jasper, who have great fun on this occasion.  Jasper is probably one of a very few places in which this custom is still observed.”


This early precursor to the custom of trick or treating is recorded by Hon. A. G. Seyfert in the December 25, 1932 edition of the Lancaster Sunday News, in his article, “A Rural Christmas Many Years Ago.”

“Belsnickel is the Pennsylvania German for Kris Kringle, or Santa Claus.  I do not know if he still exists as a character feature of Christmas time, as he did when I was a lad, or not.  Two or three young chaps dressed in the most disreputable garments, with their faces blacked, a big stick in their handle, and with pockets full of nuts and candy, would roam from house to house on Christmas eve.

“They were the terror of the children and the dogs, and their mischievous fun-making was not a welcome Christmas eve entertainment in many house-holds.  Their unannounced calls were made in a rude manner many times, and the irate housewife would brush them out with a broom.  This was great fun for the ‘Belsnickel,’ and he usually thought it a joke, unless hit hard enough to make a mark by which he was identified as one of the mischief-makers.”

Neither Henry Landis (father or son) left a written record of Christmas traditions in their household, which is a shame, but it does give Landis Valley the leeway to represent the Belsnickel in a more general way that gives our visitors a good idea of the Belsnickel custom. 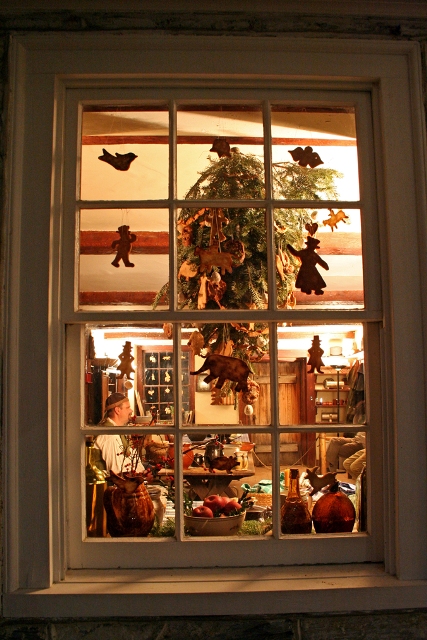 Your family can meet the Belsnickel at our Country Christmas Village, to be held on Saturdays, December 1 & 8, from 10 a.m. to 4 p.m. and on Sundays, December 2 & 9, from noon to 4 p.m.  He has a mean word for everyone and scares villagers with his switch, but his cold heart melts for children and he has candy especially for them.  The tavern-keepers buy him off with cookies, which they also share with visitors, along with hot cocoa.


The Belsnickel also makes an appearance at our “Days of the Belsnickel” lunch and dinner tours.  Back by popular demand, these tours give you the chance to tour the decorated village, learn about the Pennsylvania German Christmas customs from costumed guides, shop for unique Christmas gifts at our Weathervane Museum Store, and have a turkey dinner with all the trimmings in our historic 1856 Landis Valley House Hotel.

Pre-registration is required. To make a reservation for individuals for either of the two dates of Dec 5th or 8th (lunch program), please contact Jamie at 581-0590 or c-jschurin@pa.gov, Tuesday – Friday.
Posted by Henry K. Landis at 2:50 PM